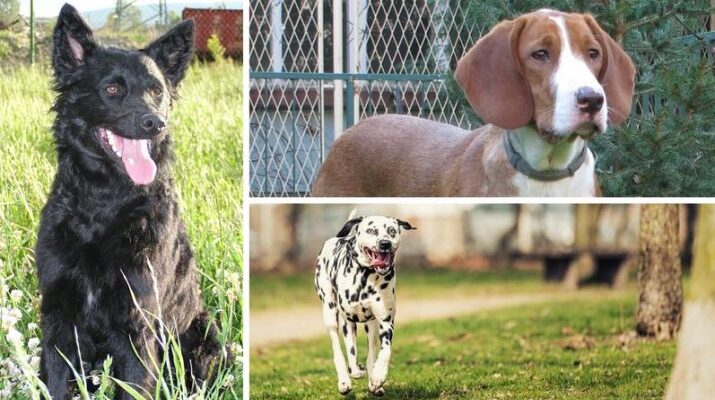 Croatia is one of the most natural and beautiful countries you can visit. It is a place with a rich and diverse history and culture, wide open spaces and a stunning coast. In addition, Croatia is a safe and welcoming country. If you have an interest in the world of dogs, Croatia is a must visit.

The main goal of this blog is to show you the beautiful Croatian nature, the amazing destinations and the best dog breeding. We will try to include all the information about the dog breeds, their origin, history, description, pictures, links that are useful for the owner.

Dogs have long been known as “man’s best friend.” Near Zadar, the earliest known bones of a modern dog were discovered.

The dog’s bone remnants (a piece of the lower jaw and two teeth) were discovered near Zadar on Croatia’s Dalmatian coast and are estimated to be between 7500 and 8000 years old.

The following is a list of Croatian dog breeds.

The Croatian sheepdog is said to have descended from dogs brought with the Croats during the Migration Period. The first record of a Croatian Sheepdog was discovered in 1374.

The Croatian sheepdog is a small to medium-sized dog with a black foundation and tiny spots of white on its chest and/or toes.

The small hairs on its fox-like head and legs are a distinguishing feature. The rest of the coat is wavy or curly and longer. The Croatian sheepdog is a high-energy, alert, nimble, sharp, and clever dog with a great need for human connection. It has a strong herding drive and makes a good guardian.

The dog was formerly often employed to herd pigs to oak forests in the fall, and one ancient record claims that this adaptable breed even herded the horses from akovo’s stables.

Dalmatian is a Dalmatian breed (Dalmatinac)

The World Canine Organization acknowledged Croatia as the Dalmatian’s place of origin, citing various historical sources. The Dalmatian is known for its distinctive white coat with black or liver-colored spots.

The earliest recorded record of a Dalmatian dog is from 1374, when Peter, Bishop of akovo, describes a hunting dog from Croatia, mainly from Dalmatia, with short white hair and black circular patches on different areas of the body, which he refers to as “Canis Dalmaticus.”

The Istrian coarse-haired hound is a rough-coated scent hound that is still used more as a hunting dog than a pet. Despite the fact that the name suggests Istria as the origin, the creation took place in Croatian Littoral, Dalmatia, Gorski Kotar, and Lika.

Since the 1960s, the origins of the Istrian coarse-haired hound have been debated, with conflicting claims from Croatia and Slovenia. Croatia was acknowledged as the breed’s birthplace in 2003 by the World Canine Organization.

The Istrian coarse-haired hound comes in a variety of sizes and has a weather-resistant wiry coat. The color is white with yellow or orange patterns, which are most noticeable on the ears. With a long upstanding curled inwards tail, the ears are wide and hang flat.

The Istrian short-haired hound is somewhat smaller than the Istrian coarse-haired dog of the same area. The coat is mainly white with scattered areas of orange and is short, silky, shiny, and firm. The physique of the breed is well-muscled, with strong legs and a long tail.

The Istrian short-haired hound is still used for hunting in Croatia, and is particularly good in fox and rabbit hunting.

The Tornjak, also known as the Croatian Shepherd Dog, is a protector of cattle. The Tornjak is an ancient breed that was originally documented in the 11th and 14th centuries.

The name originates from the word “tor,” which means “sheep pen” in the local dialect. The Tornjak is a big, muscular dog with well-balanced, nearly square-bodied characteristics and quick movements. The bones of the dog are not light, yet they are neither hefty nor coarse.

Tornjak has a pleasant demeanor. A normal adult Tornjak is a quiet, tranquil animal that seems indifferent at first glance, but when the circumstances calls for it, it becomes a watchful and attentive watchdog.

Posavac Hound (Posavski gonic) is a breed of dog native to Croatia.

The Posavac hound is a scenthound-type hunting dog. The name means “Scenthound From The Sava Valley” in English, although it’s most often referred to as “Posavac Hound.”

Posavac Hounds have a strong build, a long body, close-fitting drop ears, a long tail, and a kind countenance. The Posavac hound’s ideal disposition is described as gentle and eager to hunt.

The extinct breed of sighthound known as the Old Croatian Sighthound was almost similar to the Greyhound, albeit somewhat smaller.

The coat of the breed was short and mostly white, with black, brown, red, or yellow spots. The breed was formerly used for coursing, primarily hunting hare, where it would capture the prey and bring it to the hunter. By 1995, the breed was thought to be extinct.

Croatia is a place for lovers of nature and adventure. Here you can hike on the mountains or swim in the clear blue waters of the Adriatic. You can witness the brutal strength of nature in its wildest form, or you can spot the most exotic birds on the planet. Croatia is a place where everyone can find their own personal paradise.. Read more about french dog breeds and let us know what you think.

Which dog breed originated in Croatia?

The Croatian breed of dog is a mix of the old European herding dogs and the ancient Dalmatian.

What dog comes from Serbia?

The Serbian Shepherd is a breed of dog that comes from Serbia.

Are Dalmatians the dumbest dogs?

The Dalmatian is a breed of dog that was originally bred to be a carriage or coach dog. They are known for being friendly, intelligent, and having a good sense of humor.